The discussion in my predominately black, tenth-grade classroom was focused on racism.

We have been working our way through the book A Lesson Before Dying, a wonderful 1994 Pulitzer nominee about a rural Louisiana black man sentenced to death for a crime he didn’t commit. Set in 1947, the story pre-dates the Civil Rights days of Rosa Parks and Martin Luther King (the only such benchmarks my students really know) by roughly a decade, and chronicles the effort to see that the accused man dies with a sense of dignity.

Racism is a dominant theme of the story, and a concept that many of even my brightest students tend to incorrectly think is something in the past or, more sadly, not a huge part of their present.

During the discussion on where racism really ‘comes’ from, a black student stated firmly that racism is generally learned from one’s parents – ‘Even black racism.’ This idea was met with murmurs and nods of approval from those that are inclined to jump so forcefully into a discussion like that, but I wanted to point out that that might be a little over-simplified, noting that what parents think or believe doesn’t always transfer to a child and asking my students to think of things they disagree with their parents about. I told my students that I know of plenty of kids who aren’t racist even though their parents seem to be.

This idea was greeted with a few moments of silent indifference until one of the few white kids in the class chimed in proudly with an affirmation of my concept. “I’ve got proof of that, Mr. Lucker!” the kid said earnestly. “I’m supposed to be a fifth-generation KKK Klansman…

The class stared at me, a few with quizzical looks that I can only assume were a reaction to whatever facial expression I had as I stared at Darren for a moment. Aside from a few nods of agreement, nobody had a thing to say in response, and at first I was more surprised by the lack of reaction than I was the initial comment.

But I’m not. Just another day in the front of my classroom.

My students have a propensity for being obstinate – like most teenagers – but they will dig in their heels ferociously and adamantly defend their version when their take on a turn of phrase is challenged. Two examples from this year stand out.

The first was a sophomore who wrote about an essay commenting on her sister’s positive attitude, and the inspiration the sister provides her younger siblings, including Brenda, my student. She lauded, in worthy prose, her sister’s ‘self of 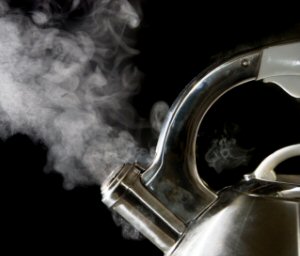 Even with provided context, I still had to read it a few times to understand what ‘self of steam’ meant for Brenda.

Discussing her paper with her, I was met with a puzzled look as I tried to explain that what she meant was her sister had a lot of ‘self-esteem’ – even going so far as to having her look up ‘esteem’ in the dictionary. Still, she contemplated, paused, looked at her paper and the dictionary, then looked up at me standing over her and said, distinctly, and with a definite correcting me tone of voice: ”Yeah, it’s her SELF. OF. STEAM, Mr. Lucker…how good she feels about herself.”

And the young woman’s ‘self of steam’ stayed that way in the final draft.

Maybe that’s what my students mean when they say, “Mr. Lucker…you’re blowin’ me!”

The other top curious turn of phrase also came from a sophomore girl, who noted that when talking about literary point-of-view, it is not third-person-limited and third-person- omniscient you need to understand, but rather ‘third-person

She too, was left unswayed by logic, or the class handout on her desk we had been reviewing and discussing, or the textbook on her desk, all focusing on ‘third-person-omniscient’ narration.

Carlene was steadfast in explaining ‘third-person-ammunition’ point-of-view – which she actually did quite well.  If you overlook the fact that ‘omniscient’ and ‘ammunition’ are not synonymous.

If you do that.  Even in New Orleans, I’m not sure ‘third-person-ammunition’ is a viable legal defense.

I had a good chuckle to wrap up the last full week of the year with Ms. W, our school’s lead librarian. Our librarians love me because I bring all my classes there at the start of the semester to teach them about the library; apparently I’m the only English teacher who does that. Plus, I actually assign book reports – hence the initial library-orientation visit. They then know where to go to find the books for their book reports.

Seems a student came into the library on Friday to return a book that he had checked out in October and found only now while cleaning out his locker. Aside from any pangs of guilt over depriving some other poor student of a book, the return of said tome also probably removed a financial hold from the kid’s record. Fortunately, the fines cease when the fine amount reaches the cost of the book; $16 in this case.

As Ms.W clicked away on the computer showing the book as returned and getting the kid’s holds removed, she said the running dialogue continued as follows:

“Well, at least I hope you enjoyed the book.”

“It was alright. Mr. Lucker made us read a book.”

All she could do relating the story to me was laugh about the kid’s ongoing ‘Mr. Lucker made us read a book.’ I shook my head and said, ‘So, I suppose I should wear that as a badge of honor?

She continued laughing as I headed for the door, “Why not, Mr. Lucker? Why not?”

All this time I thought I was teaching English, not eastern philosophy. But I guess if the mantra “Mr. Lucker made us read a book” is the primary result of the year, maybe that will enhance someone’s self-of….

Eh. You know what I mean.

This site uses Akismet to reduce spam. Learn how your comment data is processed.

My books are available on Amazon.com

Search the Marchives for interesting posts